The way Kambo works in our bodies and non-physical realms is neither well understood nor measurable. But for a practitioner, a basic comprehension of the human body’s anatomy and physiology helps assure better safety for him and his client and a more straightforward assessment and avoidance of any potential risk. In this article, I try to present in a schematized and comprehensive way the structure of the skin – our largest organ and one of the most complicated in the whole body – and how Kambo peptides get through it, how they circulate in human’s organism, and how they reach every tissue.

Kambo peptides’ introduction to the human body through the small burns (gates) of the upper layers of the skin is possible because of a very well-developed network of capillaries – almost invisible with a naked eye veins, arteries, and lymphatic vessels – called venules, arterioles and lymphatics. In fact, many substances can be administered transdermally in the form of patches, without any invasive manipulation, like hormones (testosterone and estrogen for replacement therapy), opioids (fentanyl, morphine as a treatment of chronic pain), and many others. But due to the structure of our skin, their absorption is slow, and the patch itself has to meet some specific criteria. Removal of the upper part of the skin exposes some deeper structures, mainly lymphatics, and enables the intake of water-diluted peptides into the circulation (fig.1). 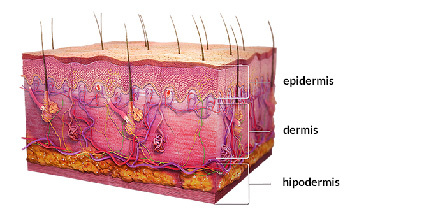 Figure 1.Schematic cross-section of the skin. Adapted from ABS skincare.

The upper part is called the epidermis and is composed of several layers. The stratum corneum is the most external, superficial one, formed by dead cells, loosely bonded together, and alive cells are localized underneath it, in stratum granulosum, spinosum, and basale. The lower skin part is called the dermis, which means proper skin. This layer contains capillary vessels, hair follicles, sweat glands, sebaceous glands, and lymphatics, as well as many other structures not mentioned here. The hypodermis is the lowest part of the skin and contains capillary plexus, tiny nerves, muscles, fat cells. Adapted from ABS skincare.

A correct gate opening should be performed within the level of the epidermis. Any burn or injury over the basal layer leaves no scars. But as the surface of stratum basale is not uniform but rather forms dense papillary structures, even a cautious opening leaves superficial scars. Thus, there is no benefit from small burns, as they don’t provide enough exposed surface for the peptides to penetrate, but the scarring will be similar. Also, there is no benefit from deeper burns as the coals work like surgical cautery – closes all the capillaries by coagulating them, damaging their structure and thus prevent both bleeding and but also absorbing peptides. This thermic injury, performed just at the correct skin depth, allows a detachment of the corneal layer (remember blisters?) with no harm to the basal or deeper layers.

When the gate is open, and the Kambo point is placed on the skin, water-diluted peptides start to enter the skin. Peptides are much smaller structures than cells, so they can “leak” between cells easily until they reach lymphatics (fig.2) where they are taken along the lymphatic system (fig. 3).

Figure 2. Lymphatic vs. venula cross-section: the structure of a lymphatic is loose and a venule – dense. 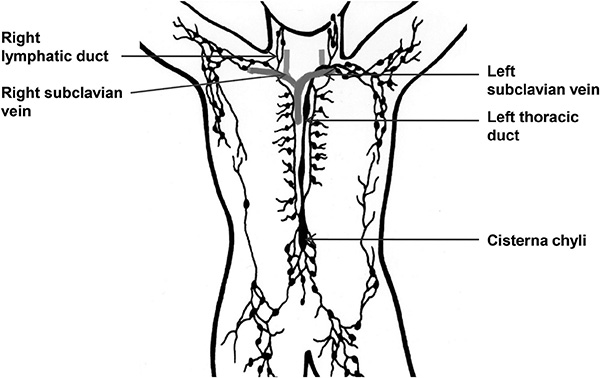 Note the right lymphatic duct drains upper right limb, right thorax and chest. The rest of the body is drained by thoracic duct.

The smallest lymphatics are present in every tissue of our bodies, and they play a crucial role in transportation and defense. They gather and form bigger units, called lymphangions, equipped with a valve that prevents the liquid from moving backward.

It is our pathway to identify, deactivate and transport to the lymph nodes any microbes from any skin injury so that they can be “analyzed,” and then a proper defensive reaction can be triggered. Lymphatics from our bowel transport all kinds of particles, products of our digestion, like amino acids, triglycerides, and sugars, to the liver. Finally, they transport water, blood plasma recovered from the inter-cellular space, proteins, metabolites (cellular “waste”), and all this is called lymph. The whole system ends up in the right lymphatic duct and thoracic duct, which ultimately joins the bloodstream via subclavian veins (fig.4) 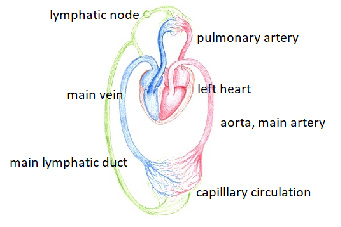 Figure 4. Circulatory and lymphatic systems connexion. The red color is for arterial, oxygenated blood, blue – venous, oxygen-deprived blood. The purple is for capillary vessels, where the exchange of oxygen with surrounding tissues is possible.

Kambo peptides then are pumped to the pulmonary circulation, from there to the left heart ventricle, carried by oxygenated blood, and then, via big arteries, to the rest of the body, also back to the skin. As they move through our circulation, some find on their way their receptors – small, compatible with them structures, placed in different tissues: heart, lungs, blood vessels walls, brain, bowel walls, etc. They find their final destination and start to trigger changes in the heart rate (HR), blood pressure, capillaries opening, and many others. Wetting, flipping, or changing points provide more peptides to penetrate through the skin barrier. The direct impact of any point localization at the physical level is related to the subclavian veins and the efficacity of the micro-circulation: the closer they are placed, the more effective is the lymphatic transport, the faster they start to circulate in the main bloodstream.

Direct action on underlying tissues is way less effective and slower, as a particle of a peptide will encounter on its way many obstacles, called fascia or aponeurosis – a thick layer of non-vascularized tissue that covers every muscle and joint. The peptide will be eventually harvested by nearby lymphatics and taken via the usual path to the central veins before reaching any deeper structure. What’s more, the analgesic properties of neuropeptides depend on their receptors, localized directly in the brain, spinal medulla, and peripheric nerves; thus, applying points around a painful part of the body may alleviate the pain in a different than peptides-related mechanism.

If the points are applied in the swollen limbs (lymphoedema), where the lymphatic circulation is not adequate, we can observe delayed reactions to Kambo. This condition can be related to heart insufficiency, veins insufficiency, but also surgical lymph nodes removal (lymphadenectomy) in cases of cancers, especially breast cancer, the latter being a contraindication for any invasive manipulation at the swollen arm.

This abbreviated information should easily allow us to understand the mechanism we use to introduce Kambo peptides into the body and their distribution. Still, we have very little knowledge of how particular peptides act and even less about the non-physical properties of this medicine.