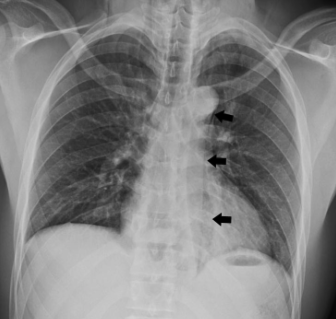 Oesophagus/Esophagus Rupture is an extremely rare occurrence, although it can potentially happen to anybody at any time. Because of the increase in individuals receiving Kambo, it seemed appropriate for us as an organisation to share the information we have gathered with you.

It should be noted that that this paper is very much a live document and may change and evolve in the future, as we are only talking about 2 instances within the IAKP in which the clients presented different symptoms/signs.

What Do We Know

What we do know for certain is that Kambo is not the cause of an Oesophagus/Esophagus rupture on its own but it may point to a weakness within the body that may not have otherwise been known.

The most common cause of Oesophagus/Esophagus ruptures are endoscopies (Cameras inserted into the throat for medical procedures). They make up 50% of all ruptures, when diagnosed early there is a 10% mortality rate rising from 40-66% after 24 hours. (https://www.ncbi.nlm.nih.gov/books/NBK6892/).

Boerhaave’s Syndrom is a rare condition that involves the spontaneous rupture of the Oesophagus/Esophagus.

Today, Boerhaave’s syndrome accounts for approximately 15% of all cases of esophageal rupture. Although the actual incidence of esophageal perforation worldwide is unclear, some studies estimate an incidence of approximately 3.1 per 1,000,000 per year.  The patient population who suffer from Boerhaave’s syndrome varies, but the risk is highest in middle-aged males.  The condition is highly associated with alcohol ingestion. (https://www.ncbi.nlm.nih.gov/pmc/articles/.)

ALL THE ABOVE ARE NOW THEREFORE CAUTIONS

The Two Instances Within the IAKP

Instance 1 was in 2017. The client, a male in his late 30’s, with a disabled right arm and a history of several car and motorbike accidents. The client was receiving Kambo for the first time and was given 3 points of Kambo. Within 5 minutes of application he complained of pain moving up and down his body and an inability to purge despite wanting to. He was in great discomfort. The practitioner believes that the inability to purge was caused by a preexisting tear that may have been exacerbated by the pressure that Kambo placed on his Oesophagus/Esophagus. The client was taken to the emergency room immediately where he was put in intensive care and fed intravenously for two weeks. A mesh was placed on the tear to repair it. Doctors treating the client said they believed the tear had been caused by the clients history of motor accidents. The client made a full recovery.

Instance 2 was in 2021 when a fit and healthy 37 year old man who received 3 points of Kambo. His only medical history was a broken ankle from a skateboard accident that had required orthopedic surgery. Client purged normally for the first 15 minutes but with his final purge he cried out in pain and grabbed his stomach and under the right ribs/liver, when asked he said he had felt the same pain a week earlier. Client was taken to the emergency room where he received a thoracotomy and repair of dissection surgery. As of 2/27/2 – six weeks after the incident, the client is slowly recovering. He is still eating pureed foods and continues to have tubes hooked up to him. However, he is going to see a surgeon soon to see about having the tubes removed.

There has been a 3rd reported instance of Oesophagus/Esophagus rupture outside of the IAKP. When a 62–year-old woman, with a past medical history of major depressive disorder, alcohol, and nicotine dependence, presented to the emergency department with shortness of breath, epigastric abdominal pain, nausea, and non-bloody emesis for one day after receiving Kambo

All three instances above presented differently, but based on these and research we have undertaken we believe that these are symptoms to watch out for.

Symptoms to Watch For

Inability to purge accompanied by pain moving through the body.

Shortness of breath or shallow breathing
*If individuals are experiencing any of these symptoms, do not allow intake of foods or liquids and contact the emergency services.

The Following Conditions Are Now Contraindicated

Any previous Oesophagus/Esophagus bleeding or rupture.

Given this new information it is imperative that we give our clients the ability to make an informed decision before taking Kambo. This is called informed consent. Informed consent is the process in which a practitioner/provider educates a client about the risks and benefits of receiving Kambo.

We believe the risk is very small, two cases among the many tens, if not hundreds of thousands treatments that we have given as an organization.

However, the impact could obviously be very serious. Therefore make sure your clients are aware that there is a very small risk of Oesophagus/Esophagus Rupture, make them aware of the potential risk factors stated above.

And do not hesitate to contact emergency services, if a client presents with the ‘symptoms to watch for’ listed above.